It’s Burns Night, and to mark this momentous occasion I’m delighted to be handing over control of the blog to Robert and Roberta Hoon, for what is the first, and very probably the last, of their ‘Cooking with Bob & Berta’ segments. The transcript that follows was taken from Bob’s kitchen, where both Hoons worked together to create this special dish.

I take no responsibility for the content that follows, or for any food poisoning that may be caused by following the recipe. I’m assured it’s perfectly edible, but I’m making no promises. Enjoy!

Berta: For fuck’s sake. “Rabbie Burnsitto”? Is that meant to be a pun?
Bob: It’s no’ meant to be a pun, it is a fucking pun.
Berta: Aye, well, it’s a shite pun.
Bob: Shut the fuck up. It works if you drag it out. “Rabbie Burrrrrrnsitto.”
Berta: Aye, you keep fucking telling yourself that, Bobby. But you’re wrong. It doesn’t work. It’s about as funny as a broken arse.
Bob: It’s a pun. It’s no’ meant to be fucking funny!
Berta: Oh, well you’ve nailed it then, in that case.
Bob: Jesus Christ, will you shut up? We’re meant to be doing a fucking thing.
Berta: What thing?
Bob: The thing! The fucking recording thing. For all them fuckwits to follow what we’re making.
Berta: Is this on the telly?
Bob: Is it fuck on the telly. You wish it was on the telly. They can’t show your face until after the fucking nine o’clock watershed, Berta, you know that.
Berta: Well what’s it for, then?
Bob: I don’t know. Some fucking internet thing.
Berta: Christ. It’ll be all paedos and weirdoes, then.
Bob: Aye, probably. Can we just get on with it, do you think? I’m growing a fucking beard here.
Berta: Well, go on then! Do whatever the fuck it is we’re meant to be doing.
Bob: Right. Good. OK. (Deep breath) Hello.
Berta: What?
Bob: (Sigh) I said ‘Hello.’
Berta: Aye, I heard you. The fuck are you saying hello for?
Bob: For the thing! For the fucking… For the internet thing! I’m no’ saying it to you, am I?
Berta: Well how the fuck am I supposed to know?
Bob: Common fucking sense, woman! Why would I be saying ‘hello,’ to you? I’ve been sat here with you for the last two fucking hours.
Berta: Exactly! That’s why I got confused. I thought, ‘What the fuck’s he saying “hello” for?’
Bob: Right. Can we just… Can we get on with it?
Berta: Don’t let me stop you.
Bob: Right. Good. (Deep breath) Hello.
Berta: Hello.
Bob: No! For fuck–

Bob: Right, so when I want you to talk, I’ll wink, alright?
…
Alright?
Berta: You’re not winking.
Bob: Jesus fucking– There! See? You see that?
Berta: Is that you winking, or are you having a fucking stroke?

Bob: Right. Hello–don’t you fucking say anything–I’m Bob, and I’m here with this trumpet full of shite to show you our twist on a classic haggis, neeps, and tatties recipe. Don’t fucking ask me why, because your guess is as good as mine, but it’s happening, so let’s all just fucking knuckle down and get through it, so we can put it all behind us as quickly as humanly fucking possible. Sound good?
Berta: Did you just call me a trumpet full of shite?
Bob: Anyway, this recipe is one of my own creation, though I’m sure other bastard’s going to come out of the fucking woodwork and say they did it first, but tough shite. I’m fucking claiming it, and if you want to dispute that, you can just come and fucking do it to my face, alright?
Berta: I hope it’s that fucking Jamie Oliver. I’d love to see that smug wee turd’s face panned in.
Bob: Anyway, none of this stuff was made from scratch, because who’s got the fucking time for that?
Berta: And because you’re a lazy bastard.
Bob: I didn’t exactly see you fucking volunteering to mash tatties for me.
Berta: I’ll mash your fucking tatties, if you’re no’ careful.
Bob: Shut up. Right, here’s what you’ll need… 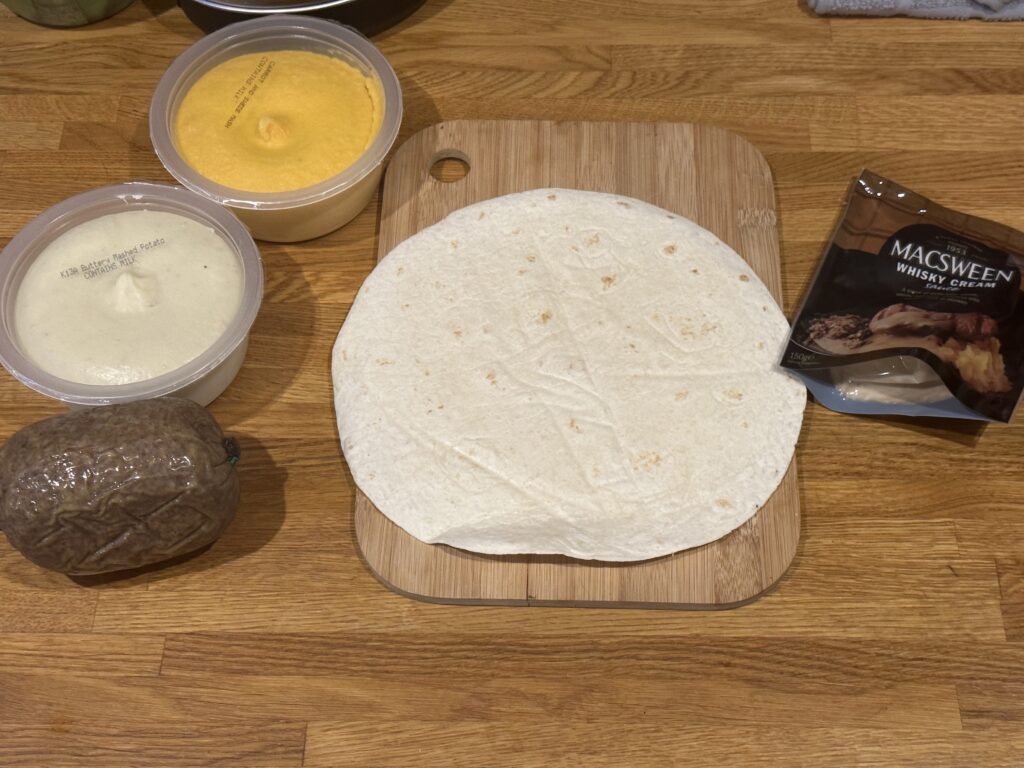 Bob: Berta, do you want to talk us through that lot?
Berta: Do I fuck.
Bob: Jesus Christ. Fine. I’ll do it. What you’ll need is:

Bob: Right, then. Let’s get this show on the fucking road, will we? Take one of your wraps and lay it flat like I just showed you.
Berta: You didn’t show me anything.
Bob: No’ you! The fucking… the guys on the internet.
Berta: The paedos?
Bob: Aye, them. They’ll see, I don’t know, a fucking picture or something. You can take the photos, by the way.
Berta: How the fuck am I meant to take photos? I’ve no’ got a camera.
Bob: Aye you do! You’ve got that camera I got you for your Christmas.
Berta: What camera?
Bob: The fuck do you mean, ‘what camera’? The camera. The only fucking camera you got.
Berta: Was that a camera? I thought it was a phone. That’ll be why nobody’s rung me on it.

Bob: Fuck’s sake. Forget I asked. I’ll just do the fucking photos myself, will I?
Berta: Works for me.
Bob: Right. On your tortilla wrap, spread out your haggis, your neeps, and your tatties like this. 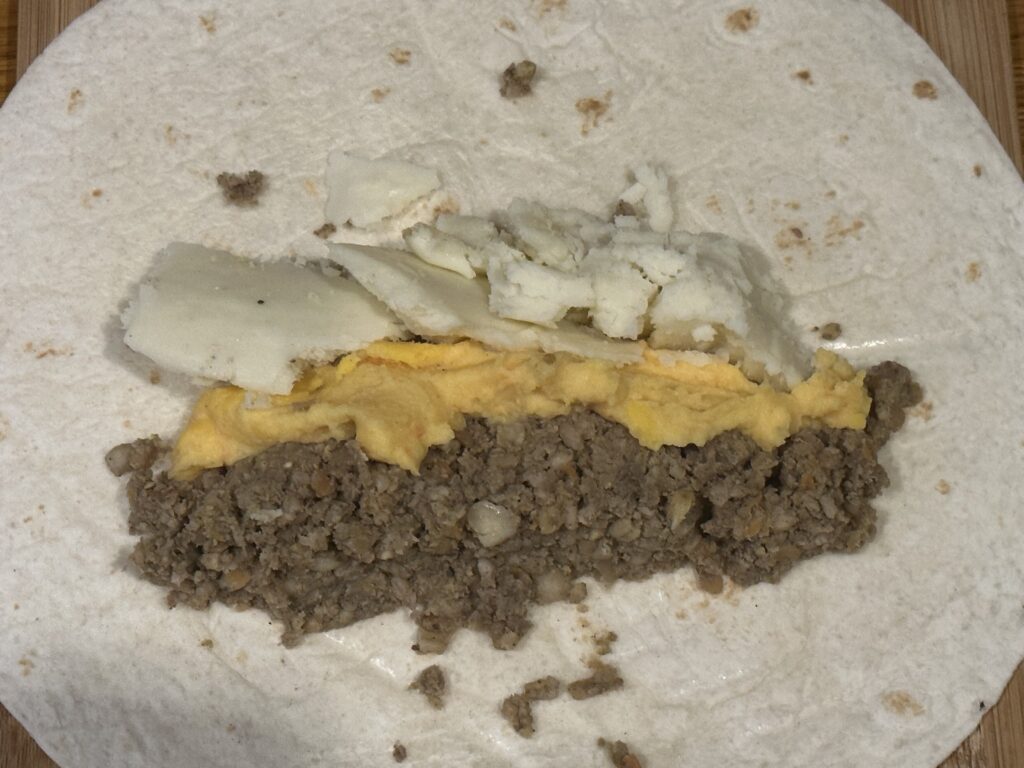 Berta: Christ All-fucking-mighty, Bobby. Look at the state of that.
Bob: What’s wrong with it?
Berta: It looks like dysentery made itself a fucking flag.
Bob: Right, admittedly it doesn’t look that appetising yet–
Berta: Appetising?! What, you mean people are meant to fucking eat that?!
Bob: Aye, they’re meant to… What the fuck did you think we were doing?
Berta: I wouldn’t fill a hole in a fucking wall with that, never mind my stomach.
Bob: Just shut the fuck up! This was only meant to take five minutes. We’ll be here for fucking hours at this rate.

<Berta muttering too quietly for the recording>

Bob: Right, where the fuck was I? Oh, aye. Spread that out like that. Add cheese if you want. I mean, it’s already pretty fucking sacrilegious as far as Burns Suppers go, so fuck it, put on what you like. Stick a fucking pickled onion in it if you want, it’s no skin off my nose.
Berta: I used to love a pickled onion. Got them from Gary at the chippie, mind? One leg longer than the other. Mind him? Had to do a figure of eight to get to the till. Course, he was completely number illiterate, too, so it was the luck of the fucking draw what you’d get charged. Can’t do them now, of course. I’d be tasting the vinegary wee fuckers for weeks. And so would you.
Bob: That’s a fucking lovely image for a cooking segment, Berta. Thanks for that.
Berta: You’re welcome.
Bob: Anyway, wrap them up however you like. Burritos are the sort of parcel ones, I think? Or is that a fucking enchilada?
Berta: Is that no’ a mole?
Bob: Eh?
Berta: An enchilada? Is that no’ a wee fucking Spanish mole, or something?
Bob: No. It’s a Mexican food. Burritos, enchiladas, quesadillas–I mean, they’re all the fucking same thing, just wrapped in a different way. It’s like Mexican Origami, or something. So, just wrap them in whatever way floats your fucking boat. And, while we’re at it, fuck it, let’s sprinkle some cheese on top. 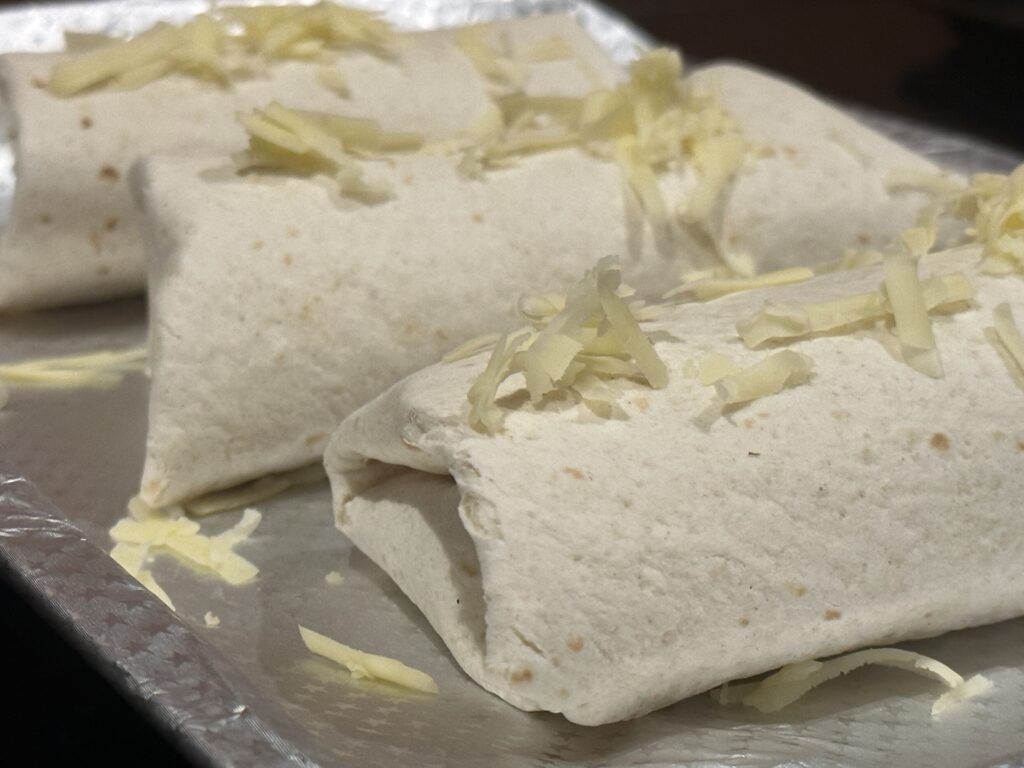 Berta: Well, that cheese is going to get burnt to fuck, I’ll tell you that for free.
Bob: I don’t care. Just fucking sling it in the oven.
Berta: What temperature?
Bob: Hot. I don’t fucking… Just a hot oven. Two hundred. That’s the only one you fucking need, anyway. Everything cooks at two hundred degrees.
Berta: What’s that in American? Because they do it different over there, don’t they? They do it the way everyone else in the world used to fucking do it, but then moved on from. But no’ those bastard. No’, they’re fucking clinging to that Farenheit scale for as long as they can, aren’t they? Mind you, this is probably for the Scottish internet, isn’t it? No’ the American one. So, I don’t suppose it matters.

Bob: What the fuck are you talking about?
Berta: Just get on with it, my feet are fucking killing me.
Bob: Right, sling it in the a hot oven for some time. Maybe, like, fifteen minutes? Fuck knows. That sounds about right. If it comes out burnt, it’s too long, and you’ve arsed it. If it comes out raw, then put it back in.
Berta: It isn’t Rocky Science.
Bob: The fuck did you just say?
Berta: What? I’m just agreeing with you, aren’t I? I’m saying it’s not Rocky Science.
Bob: Rocky Science? What the fuck is…? <Sighs> Forget it.
Berta: He got punched in the head a lot, didn’t he?
Bob: Who? Rocky?
Berta: Aye! So he’s thick as fuck. Rocky Science.

Bob: Are you taking the piss? Why the fuck would it be ‘Rocky Science,’ in that case, if it means… No. No, forget it. We’re so fucking close to the end here. Stop that tape, I’m going to get a drink.

Bob: …back on?
Berta: I don’t know.
Bob: Is the light on?
Berta: Well, how the fuck would you be seeing me now if the light wasn’t on?
Bob: On the thing! No’ the fucking kitchen light! The wee light on the fucking thing!
Berta: Oh. Right. Aye. That’s on.
Bob: Good. OK. So, where are we? Oh, aye. The finished result.

Berta: You could’ve used a clean plate.
Bob: Button your fucking wheesht. It’s clean enough. And it’s no’ looking that bad, eh? See the wee arty smear of sauce? That’s how all your fucking top chefs do it. You’ll need more than that, mind, because it’s probably drier than a badger’s chuff. Personally, I’d fucking slather it on so it was drowning in the stuff, but it’s your call. So, eh, aye. That’s it. The Rabbie Burnsitto. When I say it out loud, it does sound a bit shite, I’ll give you, but it’s too fucking late to think of anything else. Berta, anything you’d like to add?
Berta: I told you that cheese’d get burnt.
Bob: Anything nice you’d like to add?

Thanks to Bob and Berta for their contribution to the blog, and good luck if you attempt their recipe. Let us know in the comments what you’ve thought of this guest post, and they might do some more in the future. And, if you’re celebrating Robert Burns this evening, Slàinte Mhaith!

Want more of Bob and Berta Hoon? Eastgate is out now!

Manage Cookie Consent
To provide the best experiences, we use technologies like cookies to store and/or access device information. Consenting to these technologies will allow us to process data such as browsing behavior or unique IDs on this site. Not consenting or withdrawing consent, may adversely affect certain features and functions.
Manage options Manage services Manage vendors Read more about these purposes
View preferences
{title} {title} {title}